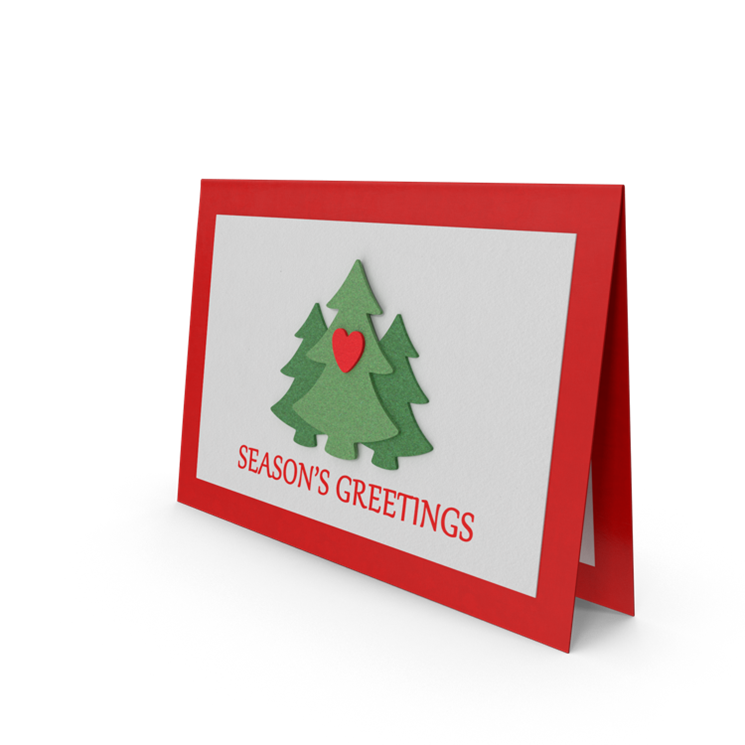 Sending Christmas cards to loved ones is a tradition popular worldwide. Even though we live in a high-tech world with ubiquitous internet and digital devices, still some like to send actual Christmas cards. A paper Christmas card is more personal and has sentimental value. It’s a tradition that started in England in the 1800s and was later adopted worldwide.

The first person to receive some form of a Christmas card was King James 1 of England. It was sent by the famous German physician Michael Maier when visiting England in December 1611. It was very different to the Christmas cards in use today. Rather than a card, it was a large ornamental manuscript. In size, it was 33″ x 24″ (84cm x 60cm) and folded into three panels. Most probably for practical reasons, so it is easier to deliver. In the middle, there was a beautiful painting of a rose. And around the rose was a Christmas and a New Year message for the king and his son. In addition, there were four poems and a song.

Sir Henry Cole introduced the concept of sending Christmas greetings in a card in 1843. During that period, Sir Henry Cole was an assistant post office keeper. The postal service was relatively new, and sending a letter was expensive. Primarily it was the rich and elite who used the postal services. Hence, he wondered how to make the postal service popular among the general public. As a result, he helped introduce Penny Post. It allowed the sender to use a penny stamp to send a letter, but very few used the postal service. He wondered how to make the postal service popular among the general public. Eventually, he came up with the concept of the Christmas greeting card to give people a reason to use the Penny Post.
Together with his artist friend John Horsley, they designed the first Christmas card. The card had three panels. Two outer panels on either side had drawings of people helping the poor. And in the middle panel was a drawing of a prosperous-looking family toasting for the holidays. On the top of the card, there was space to write a personalized message. At the bottom of the card read the caption “A Merry Christmas and a Happy New Year to You.” The card was printed using the lithographic printing technique on a piece of stiff cardboard and later coloured by hand. They printed about 1,000 cards and sold them for a shilling per piece. Paying a shilling for a card was expensive at that time, and the venture was a commercial flop. A few years later, the second Christmas card came in 1848. The designer was the artist William Maw Egley. That card also shared similarities with the first card, where the illustrations included the middle class enjoying the festive season and helping the poor and needy.

Around 1860, as printing technology and mail services improved, the tradition of sending Christmas cards caught on. With the high demand for the cards, the card manufacturers rushed to meet the demand, making the cards more affordable. The new cards become more creative with multiple illustrations. Some cards had images of the Nativity scenes, and others with robin birds or snowy landscapes were popular. The tradition of sending Christmas cards crossed the pond and arrived in the US around the 1840s. But they were costly, and only a few could afford them. In 1875, Louis Prang, a German immigrant who ran a print shop in Boston, created the first US Christmas card. His cards featured drawings of flowers, plants and Children. Later in 1915, John C. Hall and his two brothers started printing holiday cards (now famously known as Hallmark Cards). They used “off-set printing”, the latest cutting-edge printing technique at that time. Instead of traditional heavy metal plates, the new technology involved rubber rollers on the printing press, producing sharper and more colorful prints. And instead of a postcard-type greeting card, they came up with a folded card with the dimensions of 4″ by 6″ (60cm X 96cm) inserted into an envelope. The success of Hallmarks cards spawned many other competitors who wanted to get into the holiday cards business.
Until recently, the sale of holiday cards had been on the decline. Only a handful of niche publishers printed them. With the advancement of communication, people have multiple ways of keeping in touch efficiently. Some even predicted that sending holiday cards is a dying tradition. But recently, there’s been an increase in online sales for paper greeting cards. The younger and technology-savvy millennials have developed an interest in greeting their loved ones with actual paper cards. It gives hope to the greeting cards industry. There’ll probably be another revolution of holiday cards that may result from the demand from this new demography.