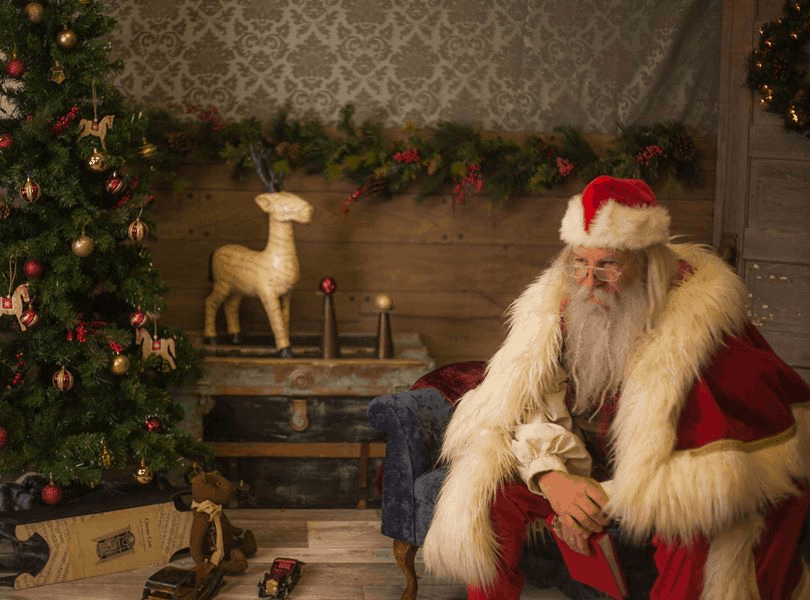 Father Christmas lived in 15th century England, and he was depicted as a tall, thin man in a green robe. He was a merry old man who was considered to be a symbol of Christmas celebrations. He played an influential role in urging people to eat and drink as they celebrated the birth of Jesus Christ. Christmas was celebrated differently back then, focusing more on adult entertainment than now. And there was no connection between him and the children, and he didn’t give gifts, stuff stockings, or visit houses of children at night.

The earliest known reference to Father Christmas dates back to the 16th century when he was mentioned in a Christmas carol written by Thomas Tusser. Since then, he has been mentioned in numerous works of literature, including A Christmas Carol by Charles Dickens and The Night Before Christmas by Clement Moore.

How St Nicholas became Sinterklaas in the Netherlands

The origins of Santa Claus can be traced back to the Greek bishop Saint Nicholas from Myra (modern-day Turkey) in the 4th century. He is often depicted elegantly dressed in a red cape, bishop’s tall hat, shining ring and a jewelled staff. He was known for his acts of goodwill and habit of giving gifts to children and the poor. In 1087, after the saint’s death, his remains were moved to Bari, Italy, and his legend spread throughout Europe. By the 11th century, he was the patron saint of children, unwed maidens and sailors, and the city of Amsterdam.

In the Netherlands, this saint was embraced with the nickname Sinterklaas. The legend has it that he would visit during the two weeks before his birthday, known as St Nicholas day, which falls on 06th December. At night, he rides on his white horse from house to house, stopping at each rooftop and listening for good children through the chimneys. And he would leave gifts and sweets in their shoes. Eventually, markets sprang up in the Netherlands to sell toys and treats for the occasion, and impersonators entertained crowds in red bishop costumes.

The merge of Sinterklaas and Father Christmas.

Exactly how Sinterklaas made his way across the Atlantic to North America as Santa Claus is unclear. His story possibly made its way to New Amsterdam, the Dutch colony that later became New York City. The Dutch explorers dedicated the first church they built on the island of Manhattan to Sinterklaas in 1642. Sinterklaas and Father Christmas were merged by the British in 1664 when they took control of New Amsterdam.

Santa Claus as we know it is a more recent invention, first appearing in American popular culture in the 19th century. The earliest known reference to Santa Claus was in the 1823 poem “A Visit from St. Nicholas” (better known as ‘The Night Before Christmas’) by Clement Moore. That poem introduced Santa’s red coat, reindeer, and sleigh and put his arrival on Christmas Eve instead of St Nicholas’s Day.

Since then, Santa Claus has become a fixture of American popular culture and is now one of the most recognizable figures in the world. He is typically depicted as a short, overweight man with a red suit and white fur trim. He is often shown delivering presents to good girls and boys on Christmas Eve.